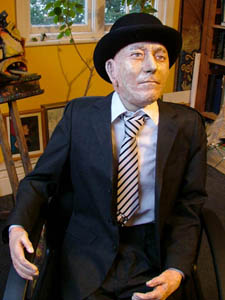 Parade puppets are constructed using a combination of willow, garden canes and for the larger pieces, bamboo. These structures are then covered with wet strength tissue and latex glue, fabric or a combination of both. Other materials and objects are often incorporated depending on what’s required. Foam is a favourite for teeth and spikes, ping-pong balls, colanders, sink plungers and even baked bean tins have been used.

Acrylic paint mixed with PVA is used to apply colour, which is then liberally coated with varnish to keep the weather out.

The Elephant and Ship are built on to reclaimed caravan chassis. The elephant is a large open basket weave of welded steel strip covered in canvas; the boat was constructed with strips of thin ply over wooden formers.

The actor’s dummy is a miniature version of the client and was commissioned with a particular performance in mind. Similar to a traditional ventriloquist’s dummy the head is operated from the back and the arm on a stick attached at the wrist. The head is latex rubber produced from a plaster cast from the client ‘s own face. It’s not the sort of thing to leave sitting in the corner of your room. 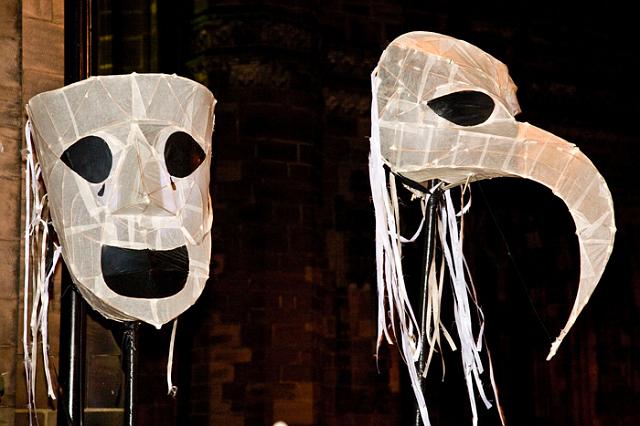 The Lanterns pictured here are all parade structures designed to be carried by one person. They are constructed from willow and bamboo held together with tape and covered in wet strength tissue soaked in latex glue. Lanterns are lit with single or multiple LED lights from inside.

The Comedia  masks are approx. 1metre in height  or length  and are carried on 4m bamboo poles. 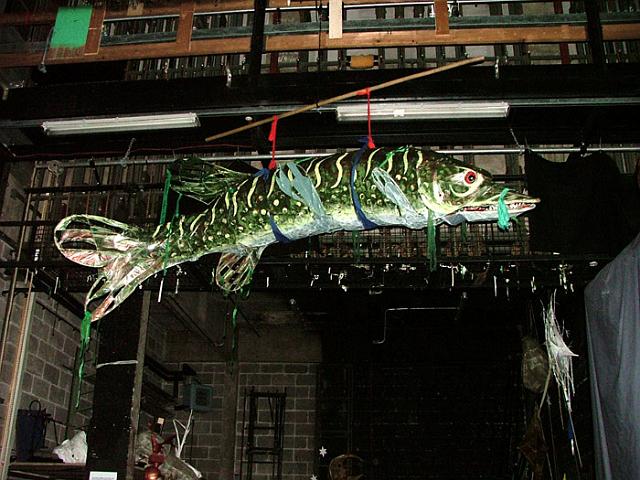 The current studio is the stage area of a theatre, complete with fly tower and hanger size loading bay. It’s a huge black box of a space with horizons in every direction.  A large studio like a big house is a dangerous thing, it gets filled. The work you create is larger and more extravagant to the point where downsizing is not going to be an option. When it’s full I think we’ll just lock the doors and move.

It’s a space with many roles: – store room, workshop, skip, music room, and rehearsal space. A place where Romans, Dragons, Hobby Horses and giants sit alongside skeletons and angels. A giant Pike hangs from the ceiling at conversation height with the family of giants which in turn look down over rail upon rail of theatre costumes. There’s also a drum kit for those moments of creative frustration.

In one corner a pile of broken puppets, half finished objects and remnants from years of school workshops. Angel hats, pirate flags and spears, trunk-less elephants, broken geese an old pram and a tri-cycle. All destined to be recycled, re-used, incorporated into something new. Nothing is wasted, nothing thrown away.

Then there’s the current project, the work in progress. Usually a complication of willow, bamboo and masking tape attached to a chair on the way to be something for a parade or exhibition. A battered canteen trolley acts as a mobile toolbox, ad hoc dining area and occasionally a rather precarious stool. The floor is covered with the debris of making, paint spills and dropped hand tools. The broom is temporarily absent – holding the head of the stag while it’s being mended.

It’s a magical other worldly space where almost anything can happen. A place where the stuff in your head gets real.

Visit the Studio and Work in Progress Gallery 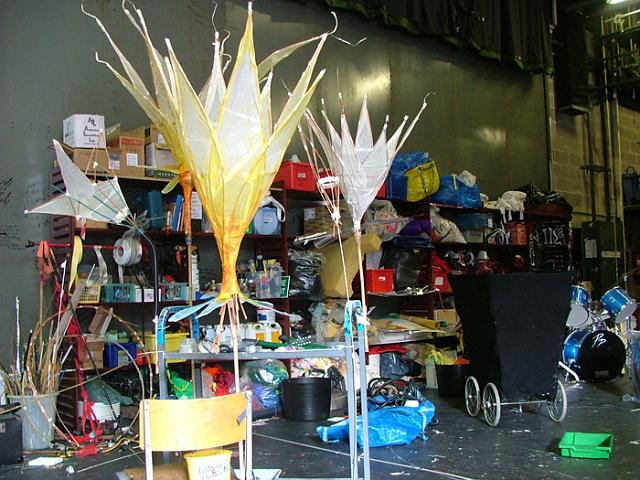 Flower Lanterns for the Chester lantern parades in November 2009 that were be fixed into the black flowerpot on wheels (an old silver cross pram). This is visible in one of the photos.

Midsummer watch puppets – dragon, camel and pike – which are being mended prior to storage until next year.